Review | The War Inside (The Horizon Trilogy, #1) by M. Kircher 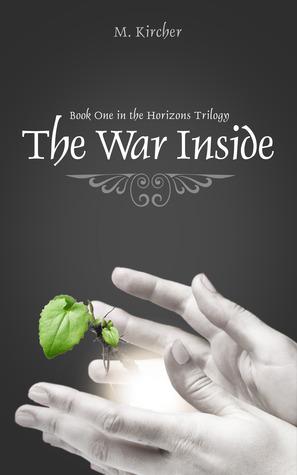 The War Inside (The Horizon Trilogy, #1) by M. Kircher

A mysterious dystopian fantasy with hints of romance, action and supernatural. Heavily character and setting driven.

The end of the world is only just the beginning. So eighteen-year-old Thea discovers when her solitary life on a dying Earth is shattered by a mysterious dream, a devastating choice, and a strange gift that propels her on a journey towards the restoration of all mankind.

Thea is bitter and alone; a perfect embodiment of the sunless, cloud-covered Earth she inhabits. A terrifying dream convinces her to save the life of an injured girl, and despite her misgivings, Thea decides to rescue sixteen-year old Viviana. She soon learns that gentle Viv has a life-threatening infection, as well as a freakish patch of glowing skin over her heart. When this light spreads to Thea, she is forced to trust Caden, an arrogant, lazy, and annoyingly handsome boy she despises. Caden has a map to the last city on Earth, and the only place that might have a cure for both Viv’s infection and the strange light on Thea’s hands. As the trio embark on a journey through the barren wilderness, Thea and Caden try to fight their mounting attraction and discover that the light is not a curse, but a powerful gift meant to heal the polluted Earth and reconnect the remnants of humanity. What they don’t know is that deadly shadows watch them, waiting for the chance to make sure that humans stay in the darkness forever.

It was the blood that caught Thea’s attention.

The mountain side rumbling scene. I was so scared!

Thea’s world is dying. We don’t really learn why. The sun does not penetrate “the canopy”; thick, gray clouds. Thea has a dream of a dying girl and a strange voice that demands that she save the girl from dying.

For Thea to save the girl she must go on an adventure with Caden, a very muscular guy she finds attractive yet repelling.

I enjoyed the plot because of the adventure and the building of Thea and Caden’s relationship. The girl Thea needs to save is Viv. The characters made the plot better. I felt somewhat confused as to why the Earth was dying and why there were menacing shadows and “the Ancient One”. Who or what are these things? Some sort of supernatural element? The devil? I still have no clue but that didn’t deter me from reading the story.

The glowing chest of Viv and the glowing hands that Thea get were very cool. Loved this element of the story even if I don’t understand what’s going on with the glowing either.

As stated the Earth is dying and under a thick, gray canopy of clouds that the sun cannot penetrate. The landscape is barren with only moss and vines able to vegetate. Many of the people are forced to live with what they can scavenge up. I had a hard time visualizing Thea’s home though. I couldn’t figure out if she’d made a hut or if she was in an abandoned house from before. More details in this area would have been nice.

The outside adventure was handled great and I enjoyed that setting very much.

This is written in third-person omniscient or episodic third-person. Meaning we get the inside thoughts of all the characters told in third-person point-of-view. At first this point-of-view was strange to me. I’m used to first person or limited third-person. I had a difficult time determining what POV this was actually written in so I Googled and found this DELIGHTFUL rant on Chuck Wendig’s blog terribleminds “25 Things You Should Know About Narrative Point-of-View“.

While I enjoyed knowing the inner feelings and emotions of all the characters I think I would have preferred this POV in only Thea’s. Since there is a mystery element here I think the third-person was okay. Maybe an alternating first-person would have been a good option.

Dystopian novels are nothing new.  Adding the fantasy element was awesome. Making this more of an epic fantasy was a nice touch too. I personally love adventurous fantasy with a touch of mystery, romance and epic battles. This book has all of these elements.

Thea is a bit rough. We get the feeling that her roughness is from the rough life she has been living in a world that is dying. Fending for herself from a young age. She is plagued with ridiculously beautiful curly, red hair and jade green eyes. Her roughness was a bit over done to the point that I had a little bit of hate for her. Once her barrier started to go down towards the end I did enjoy her more.

Caden is a nice hunk of hunk. He is portrayed as a well muscled, egotistical male. We don’t learn much about him personally, almost nothing at all actually. Only that he has stumbled upon a map that leads to the last standing city. His reasons for helping Thea and Viv on their journey is that they will make good bait should they encounter any dangers on their journey. I am happy to say that I found Caden one of the most intriguing characters of the book. I wanted to know more about him and was slightly disappointed to not learn much more that we are told from the beginning. His character really opens up emotionally towards the end and I loved that. I hope we learn more about him in the next book.

Viv is special but we have NO IDEA WHY!?! We learn what the light can do when it’s on the hands and we know that Viv is pure of heart but we don’t understand what that means!

We meet Rain on the journey. I enjoyed him and hope we learn more about him too.

Enoch is awesome. Naomi is strange.

There is some sexual tension between Thea and Caden. Since this is in third-person we learn how each of them feel and how they deal with those feelings. I would have enjoyed a tad bit more of the romance element but here’s to hoping that’s addressed more in the next book.

The cover is gorgeous. The title is eh. I don’t get the series name “The Horizons” but maybe that gets reveled later?

I can’t say that I loved or hated the ending. It kind of just ended with Thea and party arriving at a new land, meeting new people and devising a plan for the next leg of their journey.

The second book of this series is titled THE GRAY HORIZON per the author’s website.

Bad Behavior has blocked 253 access attempts in the last 7 days.