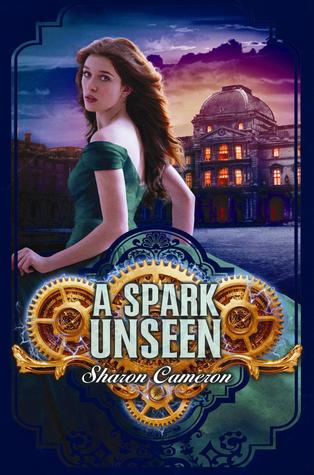 A Spark Unseen (The Dark Unwinding, #2) by Sharon Cameron

I am unable to post a full review as I have not finished reading the book.

When Katharine Tulman wakes in the middle of the night and accidentally foils a kidnapping attempt on her uncle, she realizes Stranwyne Keep is no longer safe for Uncle Tully and his genius inventions. She flees to Paris, where she hopes to remain undetected and also find the mysterious and handsome Lane, who is suspected to be dead.

But the search for Lane is not easy, and Katharine soon finds herself embroiled in a labyrinth of political intrigue. And with unexpected enemies and allies at every turn, Katharine will have to figure out whom she can trust–if anyone–to protect her uncle from danger once and for all.

Filled with deadly twists, whispering romance, and heart-stopping suspense, this sequel to THE DARK UNWINDING whisks readers off on another thrilling adventure.

I opened my eyes, the air in my bedchamber pulsing with the kind of silence that only comes in the wake of sound — a sound that never should have been there.

Haven’t picked one yet.

Other than keeping Uncle Tully hidden and a few other things, the only major plot is finding Lane.

Paris is the new setting. The new house is very interesting.

The writing is as splendid as the first book.

So far the originality is just fine.

We meet a few new characters due to the move to Paris. Since I’m only a little over half way done I don’t feel comfortable giving my review of the new characters because there are a few questionable characters.

Don’t get me started! Where is Lane!? Again, only half way into this and I miss him terribly.

Sharon Cameron was awarded the 2009 Sue Alexander Most Promising New Work Award by the Society of Children’s Book Writers and Illustrators for her debut novel, [amazon_link id=”0545327865″ target=”_blank” ]The Dark Unwinding[/amazon_link]. When not writing Sharon can be found thumbing dusty tomes, shooting her longbow, or indulging in her lifelong search for secret passages.

Hop on over or back to the other Blog Hoppers!

Bad Behavior has blocked 253 access attempts in the last 7 days.