Today I have the honor of hosting a blog tour with Marie Lamba, the author of new release DRAWN!

To see the other Blog Tour stops check out Marie’s blog. 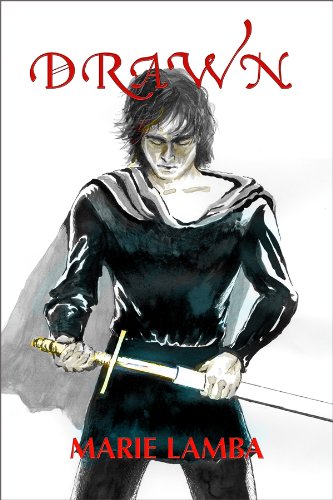 A guest post by Marie Lamba, author of the new paranormal Drawn

We writers have the best job in the world. We get to perform magic, to make things mysteriously appear out of nowhere. All writers do this when they write fiction, but when we are writing actual fantasy scenes, well, that’s more magical than ever.

The trick, as with all magic, is making the audience believe. In my new paranormal novel Drawn, the main character Michelle De Freccio is an artist that draws and then meets Christopher, a hot medieval ghost with a sketchy past. Okay, so you have to suspend some disbelief when you read books like this, but my job is to make everything as credible as possible. I didn’t want to create something goofy, but a novel that is gripping and that feels very real. A story that truly draws you in. To do this, I grounded as much as I could in a gritty reality, and only put in a few spare touches of magic.

On the reality front, it helps to have a character like Michelle who is a born skeptic, and a cynical Jersey-girl to boot. She’s hoping to start over in England and have a more normal life (back in New Jersey everyone called the De Freccio’s the De Freakos…her family has an odd background and she was labeled a freak).

Even Christopher, who is technically a ghost to Michelle, is a realist living in his own world in the 1400s. Convincing both of them that they are linked in a time traveling relationship isn’t easy. People who are skeptics need some undeniable proof…and a touch of magic, like in this scene from the book, narrated by Michelle, when she realizes she’s truly in another time and invisible, among other things:

But Thomas Haston’s vision remains barely focused on Christopher. “Yes, master.” He bows his head. “I shall grab the reins.”

He hurries toward us. Straight toward me. He must be completely blind, because he’s going to walk right into me.

He doesn’t walk into me. He walks through me. Like I’m a stream to be waded through. My skin feels itchy and a nasty saltiness fills my mouth. Christopher releases me and looks at me with horror. I look at my hands, expecting them to be see-through, but they’re solid. “What the hell?” I say.

“What in hell,” he says, his voice barely a whisper.

So who is the ghost here, and what, exactly is going on? Here’s the end to that scene:

Christopher takes both my hands, gingerly, as if he’s afraid they’ll burst into flames. “What are you? A sprite? A spirit? A phantom?”

While much of Drawn is based in realistic scenes, whether in the present or in the distant past, there are a few times when I really get to flex my magic muscles. One of my favorite moments happens when Michelle brings a book with her into the past, a book that reveals all the battle outcomes in the 1400s. While Christopher would be able to use this information to his advantage, this will clearly mess with destiny. Some things are just not meant to happen, so:

I run my finger over the text to where I left off. “The Duke, misreading his opponent, brought his forces for the Christmastime to the castle of…” Suddenly the page looks different. More white space. Less words.

“The castle of?” Christopher prompts.

I try to focus on the words. “…for the Christmastime to the castle of Sandall, but…” Something seems to move across the paper. My skin crawls, as I slide my eyes downward. I watch with horror as the letters at the bottom of the page disappear one by one.

I flip the page. Letters disappear from the bottom here, too. The white of the paper grows, eating away at the words. Frantic, I flip back to the page I was just reading. Completely blank. “Oh God.”

“What is wrong?” Christopher tries to sit up.

I flip ahead a few pages. Two paragraphs are left. I quickly read, “Henry’s forces had been gathering throughout the area for some time and the land was heavily for—” The rest of that word is gone, as is the rest of the writing on that page.

“Why did you stop?” Christopher says and peers at the book. He draws in his breath as the words I’d just read vanish like a fabric unwound by a pulled thread.

Every novel with a fantasy element must have its own set of rules. In Drawn, messing with destiny can be killer, literally. The history book with its unraveling writing sends up a warning to Michelle, but she disturbs destiny anyway, and winds up putting Christopher’s fate in horrific danger… Okay, I can’t say anything more about that without spilling too much about the story.

But I can say one other thing about writing magic: If you put a very real moment right up against a magical one, the contrasts can create a seriously strong scene. In this scene from Drawn, Michelle is in her own time being attacked by a bunch of thugs from “the wrong side of Castle Road”:

As rough hands drag me off the sidewalk, I shriek “Christopher!”

They laugh. “Calling your posh boyfriend?” Bobby says. “Guess he can have you when we’re through.”

I close my eyes and hear a scream. It’s not me.

My eyes fly open. Bobby cradles his arm. Blood seeps through his fingers. “Who did that?” He looks around wildly.

I back away and another guy tries to grab at me. He shrieks as his thumb is sliced off, seemingly by nothing. It lands bloody beside me. I catch a glimpse of a rusty truck in the street before I close my eyes and curl up in a ball. Tears streak my face.

There’s more terrified screaming, then I hear them run away.

“Michelle. Michelle?” someone says and touches me. I whimper. “It is okay. I came. They will not hurt you now.” I feel the hand rub my arm and he says, “Shh now. Shh.”

I dare to open my eyes and there is Christopher kneeling beside me, a blood-smeared sword in his right hand. He drops the sword and gathers me into his arms.

For some reason, this scene always gives me the shivers. I guess I’ve always been a sucker for a brave hero in tall boots. Now that’s magic!

Marie Lamba (marielamba.com) is author of acclaimed young adult novels including What I Meant… (Random House), Over My Head, and Drawn. When she isn’t writing or doing magic tricks, she’s working as an Associate Literary Agent at The Jennifer DeChiara Literary Agency in NYC.

Teen artist Michelle De Freccio moves to England in search of a normal life…instead she finds a hot medieval ghost with a sketchy past.

It all begins when a strange guy appears in Michelle’s drawings. When she actually meets him at the town’s castle, she’s unmistakably drawn to him. But something is definitely not right. For starters, he wears medieval garb, talks of ancient murders and tends to disappear each time they kiss.

Could he possibly be a ghost? Could Michelle be losing her mind? Or has she simply uncovered a love so timeless it’s spanned the centuries…

“A lushly romantic ghost story…captivating and haunting. I didn’t want it to end.” –Cyn Balog, author of paranormal YA novels Fairy Tale, Sleepless, and Starstruck

“In DRAWN, Marie Lamba deftly entwines romance and mystery, past and present, into a page-turning adventure. Buy it today and I promise you’ll be finished reading far too quickly!” —Joy Nash, USA Today bestselling paranormal romance author of The Immortals series, The Grail King and The Unforgiven

Bad Behavior has blocked 1187 access attempts in the last 7 days.