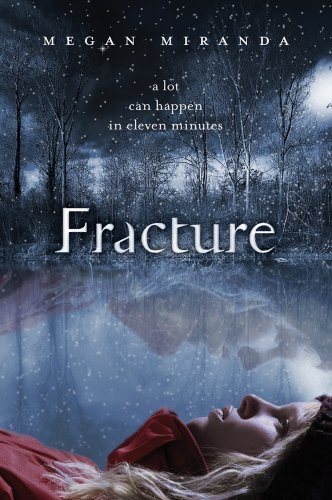 A thrilling ride that uncovers the strange happenings of life after death, but not really, and how a teenaged girl overcomes the strangeness that affects her after a crazy accident she survives with the help of her best friend.

Eleven minutes passed before Delaney Maxwell was pulled from the icy waters of a Maine lake by her best friend Decker Phillips. By then her heart had stopped beating. Her brain had stopped working. She was dead. And yet she somehow defied medical precedent to come back seemingly fine
-despite the scans that showed significant brain damage. Everyone wants Delaney to be all right, but she knows she’s far from normal. Pulled by strange sensations she can’t control or explain, Delaney finds herself drawn to the dying. Is her altered brain now predicting death, or causing it?
Then Delaney meets Troy Varga, who recently emerged from a coma with similar abilities. At first she’s reassured to find someone who understands the strangeness of her new existence, but Delaney soon discovers that Troy’s motives aren’t quite what she thought. Is their gift a miracle, a freak of nature-or something much more frightening?
For fans of best-sellers like Before I Fall and If I Stay, this is a fascinating and heart-rending story about love and friendship and the fine line between life and death.

The first time I died, I didn’t see God.

Delaney’s fall into the lake was an intense scene. I also enjoyed Decker’s reaction to Delaney in the hospital.

I don’t recall the location exactly but it’s a small town in winter. I loved the imagery used to explain the settings. I had to snuggle with a blanket for most of this book because it mostly seems to take place outside in the freezing cold!

Many scenes are freaky and chilling in a non-weather related sense.

Megan did an excellent job with writing this book. Written from Delaney’s point of view, which is awesome because Delaney’s character is refreshing. She’s a teenage girl that’s real, funny, and strong.

The summary compares this book to Before I Fall and If I Stay. I don’t think it’s like either of them. I haven’t read much of Before I Fall but I have read the other. I’d say this book is more like Rachel Vincent’s Soul Screamer’s series than either of the two previous mentioned titles, minus the screaming of course.

While it’s similar to Rachel’s series it’s truly unique. It was way creepier than I expected and incredibly intense at points. There’s also a underlying romance that is so sweet to see blossom.

Delaney’s character was so much fun to get to know. She’s so different than other characters I’ve read recently. She’s self conscious to a degree but not afraid to be who she is.

Delaney’s best friend and neighbor is Decker. His character was also very enjoyable. While I wasn’t his biggest fan the whole book I really looked forward to seeing him pop back up here and there.

Troy is the bad boy of the book. I REALLY disliked him. Seeing how the story ended was a relief and made so much sense I couldn’t help be sigh.

Delaney and Decker’s relationship was so sweet to see it mature. I was scared for them both and couldn’t have been more happier with how things turned out in the end.

A beautiful cover and the title is just perfect!

I loved the ending!

Eleven Minutes (Fracture, .5) by Megan Miranda – Told from Decker’s point of view. The 11 minutes Delaney is under water and the 6 days after the accident.

Bad Behavior has blocked 255 access attempts in the last 7 days.