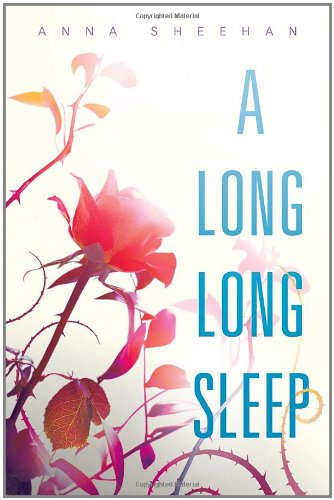 eBook from Candlewick via NetGalley.

An emotionally charged sci-fi of a young girl traumatized by her unfit parents who left her in stasis for 62 years; awoken to a new, unknown world full of technology and unending traumatic stress.

Rosalinda Fitzroy has been asleep for sixty-two years when she is woken by a kiss.

Locked away in the chemically induced slumber of a stasis tube in a forgotten sub-basement, sixteen-year-old Rose slept straight through the Dark Times that killed millions and utterly changed the world she knew. Now her parents and her first love are long dead, and Rose — hailed upon her awakening as the long-lost heir to an interplanetary empire — is thrust alone into a future in which she is viewed as either a freak or a threat.

Desperate to put the past behind her and adapt to her new world, Rose finds herself drawn to the boy who kissed her awake, hoping that he can help her to start fresh. But when a deadly danger jeopardizes her fragile new existance, Rose must face the ghosts of her past with open eyes — or be left without any future at all.

I’d try to hold on to my stass dreams as long as I could.

Towards the end when Rose just throws a fit and chucks all sorts of stuff at the walls and floor.

Sort of a Sleeping Beauty retelling, Rose is frequently put into stasis by her parents, some times for just a few days, some times much, much longer. The story tells what happens when Rose is forgotten in a storage area while in stasis. She’s found by a young man, Bren, she’s weak and confused. She has to absorb the changes her world has made as well as come to terms with the fact that everyone she once knew has died. With the help of Bren she learns what happened and why, as well as avoid the robot man that is stalking her with the intent to kill.

Set in a futuristic world of ours, filled with many advanced technological devices such as auto pilot hover cars, key carded doors, retinal scans and more. There wasn’t too much info on the surroundings beyond what Rose came into contact with. However, the island she visits is pretty interesting. The setting wasn’t a key part of the story, beyond the technology.

Any time a book can bring me to tears means the author did something right. They made me connect with the characters on an emotional level. Anna does this so well. Written so well that the book flowed as if I were watching it on the big screen. A movie adaption of this book could easily be done and would appeal to anyone able to view PG-13.

I haven’t read many sci-fi YA books so I found this to be quite original. The closest comparison would be Across the Universe by Beth Revis. If you liked that book you’ll probably love this one too. It’s not a world building as ATU but it is packed full of emotion. The fact that Rose’s world suffered from a medical epidemic gives it a small sense of a dystopia on the rebound but that’s not necessarily the genre of this book, which I’d say would be the sci-fi.

Rose is the main character and she is reeking of despair, rage, loneliness, and confusion. She befriends Bren and is drawn to him for some strange reason. She frequently has flashbacks from her childhood, which includes her best friend and later boy friend Xavier.

Rose ends up going to school with Bren and befriends his group of friends. Most notably is Otto. Otto’s character is a strong secondary character that the reader instantly falls in love with. Probably due to the outcasting of his species, his unique form of communication, and his compassion.

Her parents are a sorry excuse for parents. I couldn’t understand them at all! Why be so selfish? Having a child and then basically preventing them from growing up or being a burden on your hectic travel schedule is not a good reason to shove her into stasis whenever you want. I was so enraged at her parents. I also was enraged with her towards the end of her flash backs because she KNEW, she knew they were abusing her and she let it happen. In a sense I understand. Stasis was all she knew and she found it comforting, kinda like taking a nap is comforting to me. You wake up refreshed and ready to go. Only naps last at most a few hours, not months or years.

Rose struggles with the loss of her childhood boyfriend Xavier. She grieves by drawing him. She has a connection with Bren but it’s a little weird and off for them both.

The title is okay. It’s very generic and very obvious of the story. The cover while simplistic and lovely is quite boring and doesn’t represent the sci-fi aspect of the story.

Whoa. The ending is genius and I never saw it coming. It’s incredibly brilliant and heartbreaking. No one dies, quite the opposite actually. But that’s all I’ll say. Kudos to Anna for an ending like none other and is utterly unforgettable.

I don’t think Anna is doing this as a series. I’d love to find out what she has in the works but I haven’t seen any news. She is one talented writer and I will follow her work as long has she’s doing it.

Anna has prepared a wonderful guest post for us! Please stop by and read what she has to say about technology. Also, enter to win a copy of A Long, Long Sleep with a signed bookplate!

7 thoughts on “Review: A Long, Long Sleep by Anna Sheehan”

Bad Behavior has blocked 988 access attempts in the last 7 days.