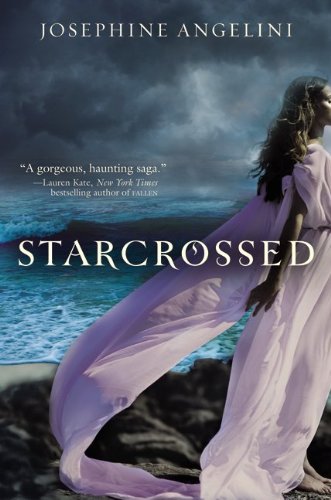 An eARC was provided by the publisher via NetGalley.

Action packed romance with teenaged, flying Greek demigods trying to cheat the Gods of their prophecy.

﻿How do you defy destiny?

Helen Hamilton has spent her entire sixteen years trying to hide how different she is—no easy task on an island as small and sheltered as Nantucket. And it’s getting harder. Nightmares of a desperate desert journey have Helen waking parched, only to find her sheets damaged by dirt and dust. At school she’s haunted by hallucinations of three women weeping tears of blood . . . and when Helen first crosses paths with Lucas Delos, she has no way of knowing they’re destined to play the leading roles in a tragedy the Fates insist on repeating throughout history.

As Helen unlocks the secrets of her ancestry, she realizes that some myths are more than just legend. But even demigod powers might not be enough to defy the forces that are both drawing her and Lucas together—and trying to tear them apart.

“But if you bought me a car now, it would be yours when I go away to school in two years. Still practically new,” Helen said optimistically.

When Helen meets Lucas for the first time. Holy cow!

This was my first Greek mythology themed book and the issue of Helen finding out she’s a demigod and meeting other demigods was very fascinating.

Nantucket, what more can you ask for? I’ve been to Cape Cod once, for my honeymoon, and loved it there. So, Nantucket seemed perfectly portrayed and serene for the setting of this story. It also just make sense once you get into the who’s and why’s.

I don’t know why I loved the writing so much but I did. I’m usually a big fan of first person point of view but I loved that this wasn’t written like that. The third person view point was awesome. I loved that the scenes and emotions came from both Helen and Lucas so that it wasn’t his or her point of view but both. It was a great touch and added so much to the story.

Like I said, this was a first for me and Greek mythology, I think. Either way I couldn’t get enough. I loved how much we learn and how much it just makes sense.

Obviously Helen and Lucas are the main characters but there are a ton of secondary characters! Because Lucas’ family is huge, with his sister and his cousins and aunts and uncles all sharing a very large home together. I love that it doesn’t get confusing at all. I love the names that were used and how each character had their own personality and reason for being apart of the story.

The relationship between Lucas and Helen is complicated. I loved how weird it started out and even how raw it ended up being in the end. I can’t wait to read the second book to see exactly where their relationship goes or doesn’t go. There are also some secondary relationships woven in as well and I’m hoping to see those continue in book two also!

Beautiful. While I was confused by the title at first it makes sense towards the last part of the book.

While I found the ending very open ended, which I was expecting, I wanted it to be a bit more closed up and a few more questions answered. I’m okay with how it ended because I went in knowing that this is a trilogy so I know that my questions will be answered but I’m not a very patient person!

Starcrossed, #3, is already listed on Goodreads so I’d expect that to release in 2013.

Bad Behavior has blocked 1070 access attempts in the last 7 days.