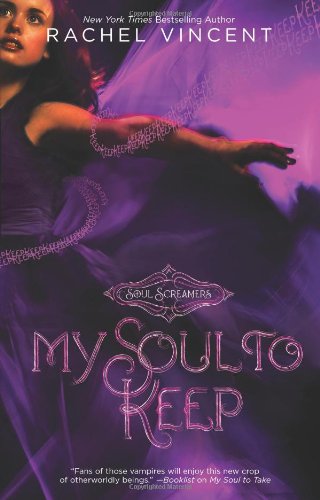 My Soul to Keep (Soul Screamers, Book 3) by Rachel Vincent

I grabbed an ARC while at the Harlequin Teen signing. I also had the eARC from NetGalley, however, it was formatted wrong and have all kinds of crazy characters in as quotes and apostrophes.

A relatable topic with strong character revelations and character cooperation. I will be eagerly awaiting the next book to see how it all pans out.

WHEN KAYLEE CAVANAUGH SCREAMS, SOMEONE DIES
AND KAYLEE IS ABOUT TO SCREAM HER HEAD OFF…
Kaylee has one addiction: her very hot, very popular boyfriend, Nash. A banshee like Kaylee, Nash understands her like no one else. Nothing can come between them.
Until something does.
Demon’s breath. No, not the toothpaste-challenged kind. The Netherworld kind. The kind that really can kill you. Somehow, the super-addictive substance has made its way to the human world. But how? Kaylee and Nash have to cut off the source and protect their friends—one of whom is already hooked.
And when the epidemic hits too close to home, Kaylee will have to risk everything to save those she loves.

The whole thing started with a wasted jock and a totaled car.

I really enjoyed the entire plot of this installment of Kaylee’s adventure. The substance abuse was something I think all readers can associate with, since it is usually a hot topic in the teen years, whether you’re a teen or the parent of the teen.

I thought the progression of the plot moved well. It was great.

I’ve been reading some reviews that have decided that the ending was cliffhanger but I’ve decided it’s not really. I think it wrapped up really nicely. Maybe not all honky-dory but there’s definitely a strong conclusion: “all will be decided in the next book”, which really sounds like a cliffhanger but it’s not. Really.

I’m a huge fan of the netherworld that Rachel has created. I love that it’s mostly a replication of the real world Kaylee lives in just darker with scary creatures.

I wasn’t a fan of the writing/plot in the previous book, My Soul to Save, so I was leery when it came to reading this one, especially after Rachel has said numerous times that it’s a darker book than the previous ones, but she did a great job at meshing everything together. Things that happened in My Soul to Save played a large role in this book and I found that nice, even though I still wasn’t liking exactly what happened in book 2. I can honestly say I’m looking forward to the next book to see how everything gets resolved, because I truly believe Kaylee will make everything mostly all better.

The entire Soul Screamers concept is 100% original. The only thing I can even compare it to is the weird series called Dead Like Me, which I’ve watched and it’s super weird.

This book introduces us to another cool netherworld creature and I’m hoping that we might meet them again.

I <3 Tod. Seriously. I like him so much more than Nash. Why? I’m not really sure except that maybe he’s more “real”. He doesn’t have a hidden agenda and he just lays it all out in the open. I love that he’s all about protecting Kaylee. He really opens up in this book and I enjoyed that. I’m not sure what Rachel’s trying to do but she seriously has me thinking there may be sparks flying between him and Kaylee. There were some minor descriptive words used during some encounters that I wouldn’t have used unless one or the other was feeling something a little more than friendship for.

Nash. Nash just isn’t cutting it anymore. The poor boy has been thrown under the bus in this book. And really, who’s to blame? I feel so sorry for him in this book. I really can’t blame him, to an extent, and yet I want to blame Kaylee and I know that’s wrong too. So, who’s to blame? The parent? The school teachers?

Kaylee. She really kicks some ass. I loved her bravado attitude. Her cousin is such a turd it’s funny. I’m not sure I agree with every choice Kaylee made but all will be found out in the next book.

There’s some major sexual tension between Nash and Kaylee. Then things start to get crazy with the substance abuse issue in the school and their relationship takes to the back burner. Now, it seems that things are going to stay there for a while yet. :(

I touched on this when the initial cover was announced. I’m not a fan of this cover. I like the color but the girl is just not right….she’s way off from being normal, which I guess is understandable with what Kaylee goes through in this book but still, it’s off putting.

Another thing? Kaylee actually wears an awesome white gown in this. Of course white wouldn’t have made an awesome cover but I think they should have tried to incorporate that into the cover, but then again the series so far has one color covers. Oh wells.

Rachel answers some burning questions about both her series over at Form Spring. SPOILERS so beware!

What did you think of MSTKeep?

5 thoughts on “Review: My Soul to Keep (Soul Screamers, Book 3) by Rachel Vincent”

Bad Behavior has blocked 918 access attempts in the last 7 days.