Review: 13 to Life by Shannon Delany 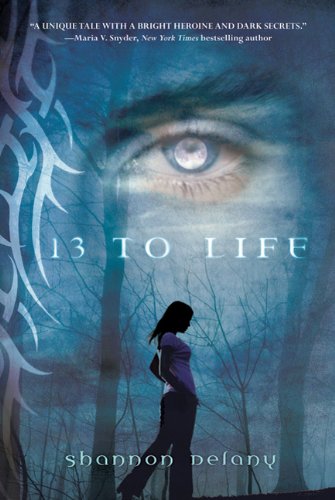 13 to Life by Shannon Delany

I received this ARC from the publisher, St. Martin’s Griffin.

An original spin on the young adult paranormal romance with some intense scenes. Could have been slightly better but I’ll be looking forward to the next book.

Something strange is stalking the small town of Junction…
When junior Jess Gillmansen gets called out of class by Guidance, she can only presume it’s for one of two reasons. Either they’ve finally figured out who wrote the scathing anti-jock editorial in the school newspaper or they’re hosting yet another intervention for her about her mom. Although far from expecting it, she’s relieved to discover Guidance just wants her to show a new student around—but he comes with issues of his own including a police escort.
The newest member of Junction High, Pietr Rusakova has secrets to hide–secrets that will bring big trouble to the small town of Junction—secrets including dramatic changes he’s undergoing that will surely end his life early.

I closed the door behind me, heading down the hallway and straight to Hell.

When Jess and her friends are at Pietr’s house to study and she’s able to open the very cool Russian nesting dolls. Loved that scene.

Ultimately the plot is centered around the new guy, Pietr, and Jess. At first things are awkward because Pietr is being dark and broody leaving Jess wanting to know more. They grow closer. Secrets are revealed yet not all secrets. Getting to the end of this book was thrilling yet painful because it left the reader wanting. Hopefully the other areas of my review will explain why.

Junction was a cool small town. I wish there would have been a map for reference in this book because it was a little hard to visualize where other locations were in reference to Jess’s house and Pietr’s house. There was great use of details to set most of the scenes.

This was written from Jess’s point of view and I really wish it would have switched a few times to Pietr’s. Since he’s so mysterious it’s really hard to get a good grip on him at first.

The fact that this novel bloomed from a cell phone (texting) contest is proof enough that Shannon is a capable writer. I’m looking forward to reading the next book.

Here’s where things get tricky. The back of the ARC states clearly what’s up with Pietr but I like to not spoil anything for my readers so……

SPOILERS! (highlight to read the below)

Pietr is a werewolf. His family is wanted by the Mafia of some sort. This puts a huge kerplunk in the plot formation of this story. Adding the Mafia aspect was hugely original but hugely weird for this sort of story. I was in a WTF haze when that aspect came in. BUT ultimately it kinda works out, as long as you get over the weirdness.

I have come to terms with how the plot adjusted to the original topic and I am genuinely looking forward to finding out what happens next.

I found Jess hard to relate to. I liked that she was able to stick up for herself and the way she adamantly put herself in Pietr’s life. She was strong yet fragile.

Pietr was a cool guy. His family was also very cool and I really wish there were more scenes with them. I’m thinking we’ll see more in the follow up book. :)

Jess’s best friend, as well as some one I think Jess should have bitch slapped, is Sarah. I honestly didn’t like her character and wish someone would have slapped her silly.

Jess’s dad was a nice character to have in this book. He kinda grounded it all at points.

Another aspect of this book that had my blood boiling. In both good and bad ways.

Jess and Pietr are awesome together. However, there was some reason or something that they shouldn’t be publicly dating, so Pietr had another girlfriend. Jess’s best friend Sarah. I hated, HATED this. I hated it for Pietr, for Jess and especially for Sarah. Ultimately it did no good and it doesn’t get resolved by the end of the book, which thoroughly enraged me.

The cover is lovely but the title is just weird. I think I understand what it means but I think something else could have been better.

I have to comment on the ending. It was an action packed ending leaving so much unexplained but lots of questions answered. You’ll be wanting the next book after reading the ending, which I guess is a good marketing plan.

Trailer (spoilers! Unless you already know what this book is about)

I’m giving my copy of the ARC away! Enter on the next post!

8 thoughts on “Review: 13 to Life by Shannon Delany”

Bad Behavior has blocked 1412 access attempts in the last 7 days.