I decided to read this because the publisher sent out an email about the second installment of this series, Ballad. I went ahead and ordered it through Amazon.com and started it a few days later. It took me 2 days to finish it.

Sixteen-year-old Deirdre Monaghan is a painfully shy but prodigiously gifted musician. She’s about to find out she’s also a cloverhand—one who can see faeries. When a mysterious boy enters her ordinary suburban life, seemingly out of nowhere, Deirdre finds herself infatuated. Trouble is, the enigmatic and conflicted Luke turns out to be a gallowglass—a soulless faerie assassin—and Deirdre is meant to be his next mark. Deirdre has to decide if Luke’s feelings towards her are real, or only a way to lure her deeper into the world of Faerie.

Plot:
Deirdre befriends Luke in quite the experience: puking in the bathroom before a recital. She’s then thrust into the land of the faeries. Finding young love, overcoming family and authority issues, and even death are all obstacles that Deidre experiences all within a very short amount of time. A week maybe? Music plays a huge role in the story.

Setting:
A small town in Virginia with a Dave’s Ice store, Deirdre’s home, school, a Sticky Pig restaurant, and there’s even a trip to Richmond. There are some dreams that take the reader away from reality just a bit and of course the glimpses into the Faerie people. My favorite setting is the ring of mushrooms. It was a very important scene too. Any scene with music was enthralling. I would have loved to listen to each song as it was meant to be heard in the story.

Writing:
This is the second book of Maggie’s that I’ve read. This, however, was her debut novel. I previously read Shiver, which differs drastically from Lament on many levels. Lament is written in first person and it’s full of detail, passion, and extensive knowledge. There’s an abundance of reference to music, harp and flute, but it’s not above the readers head or anything, just them playing. And there are several song lyrics. All of which are truly beautiful. I did take a few minutes to YouTube a video of someone playing a Celtic harp because I was having a hard time visualizing one. I thought they were HUGE but they aren’t that big. The writing is light, easy to follow and genuine to the personality of the characters.

Originality:
I’ve read other books containing faeries so this general topic wasn’t new to me. I enjoyed Maggie’s version very much. Her faeries are perceived as beings that love music, relish the chance to stir up trouble, love picking on humans or faerie seers, and are curious creatures. There were a few that were very menacing and rude but they were also necessary. I wish we would have been introduced to a few more faerie.

Characters:
The main character is obviously Deirdre. She comes from a family of long time faerie seers. Her mother and her both are able to perfect any talent. She plays the harp and sings like an angel. She has terrible stage fright that requires her to puke before performing. She’s 16 and by the middle of this book has had it with the old her and is grasping the new her that doesn’t want to be confined or trapped by her mother. She meets Luke in the oddest of places and instantly becomes infatuated with him. And he to her as well.

Luke. Poor Luke. His story is a bit more complex. He’s dangerous but so easy to be around. He is captivated by Deirdre.

James is Deirdre’s best friend. He helps defend Deirdre against the faeries. I believe he’s the main character in the follow up book, Ballad.

I liked all the characters in this book. They were all original and stayed true throughout the story.

Passion:
Deirdre’s and Luke’s relationship is ever blossoming. It’s a true teen romance. It was known pretty early in the book that they would both fall head over heels for each other. It was pure and it was cute.

Overall:
A very cool book indeed. I enjoyed every aspect of this book. I liked how it kept me guessing all the way until the end. I’m really looking forward to reading Ballad. I hope there is some sort of wrap up to Lament in Ballad. It ended not very tightly but well enough to be at peace for now.

Title/Cover:
I love both! 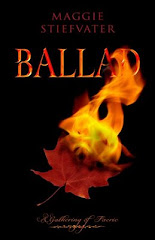 Here’s the trailer Maggie made for Ballad. Ballad releases October 1, 2009.

What do you think? Have you read Lament? Did you enjoy it? Planning to read Ballad?

Bad Behavior has blocked 753 access attempts in the last 7 days.