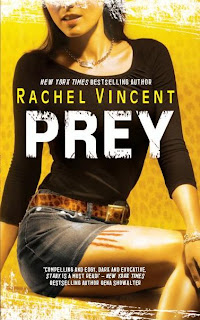 Nancy over at A Lush Budget Production Tales of a Ravenous Reader lent me an ARC of Preya few months ago. I devoured it in a matter of hours. Thank you Nancy for sharing this amazing book with me!

Wow. The plot to this installment of Faythe’s life was more of emotional roller coaster than Pride and Pride was a pretty bumpy ride if you remember. It’s all wrapped around the fact hat Marc has been exiled to the “land of the strays” and he’s stolen (!) and the political bullshit that is the Pride council *cough* Malone *cough*. The fact that Greg’s Pride is currently housing 2 tabby cats has them all testosterone ODing. They are willing to do whatever it takes to reduce the number of tabbies in that pride. Even kill. Rachel released the follow excerpt of an attack on the pride ranch.

WARNING! Contains spoilers! Read at your own risk!

We burst through the backdoor almost as one. At my first glimpse of Jace—a deep shadow in the pre-dawn darkness—my feet froze on the porch, and my breathing quickened with shock. Owen ran right into me. He would have knocked me down all four steps if my dad hadn’t caught me.

My father paused only long enough to right me, then raced across the backyard with the speed of a much younger man.

Jace was halfway between the tree line and the back door, jogging unsteadily, his arms held awkwardly in front of his chest. When he stepped into the light from the guesthouse porch, I saw that he carried Kaci in both arms. Her head bobbed limply near his right shoulder, her hair brushing his hip with each step. Her legs dangled from his other arm, one foot bare. Blood dripped steadily from either his right arm or her head, staining the dead grass with a trail of fat, red drops.

Most of the setting is on the ranch with a good size portion being in the “land of the strays” where Marc has been living, including his little house. There’s some major ass kicking done by both parties. Rachel released a few “mini-excerpts”. Here’s a glimpse of a fight scene in Prey.

WARNING! May contain spoilers! Read at your own risk!

On my left, Ethan dropped to one knee, swinging his hatchet up. The blade caught a stray beneath his jaw, and almost cleaved the cat’s head from his neck. The body hit the ground with a nauseating two-part thud—first the torso, then the nearly-detached skull—and Ethan was in motion again. I would have been impressed, if I’d had time to think about it.

But I didn’t, because Vic screamed on my brother’s other side, near the end of the car. Then he stumbled into view and fell to the gravel on his rump. The cat he’d been fighting pounced, driving his shoulders to the ground.

“Ethan!” I shouted in mid-swing, because my brother was closest. He glanced at me, then followed my gaze to Vic.

“I’m on it.” He lunged to the left, swinging the ax up even as he dove for Vic’s shovel. His blow glanced off the nearest cat, but he came up with a weapon in each hand. Swinging wildly now, Ethan knocked the cat off Vic with the shovel, then threw the ax end over end so fast I could hardly trace it. The blade thunked into the side of another cat, who dropped to the ground, chest heaving and pouring blood.

Great huh? If you were brave enough to read it Ethan kicks some werecat ass.

Rachel has done it in this book. She has written Prey so well that to not be effected by reading it would make you heartless. I like Faythe. I like Marc. But I LOVE them together and when they are not together it’s naked emotions running for them both. I say this even though it’s not necessarily written in the books but I just know that they are both traumatized when they are not together. Faythe puts on a very good facade but she just about loses it in this book with Marc missing.

My heart broke a few times reading Prey. With Marc missing, Kaci practically killing herself, Faythe being Faythe, and another event of which I can’t even speak of because it just rips open the wound in my heart, Prey left me weeping, sobbing, bawling. I can’t pick the right word for it. Just know that I burst out in tears, put the book down, wept my heart out, caused my hubby to pause his game to comfort me, snotted up a few tissues and then emailed Rachel to yell at her for being such an awesome author but I hated her at the moment for being so good. To have a book effect me in such a way proves that Rachel’s writing abilities are phenomenal. Thank you Rachel for being amazing. But please do NOT do that again. Seriously.

Wow. The plot of this book was AWESOME! It was probably the best one so far. The thought put into it had to be huge. It had me wondering throughout the entire book what was really going on. Especially since Marc was missing and people were dying and switching sides it was anyone’s guess of what was going to happen next.

Faythe shows just how strong she really is in this book. If she lives through this book relatively sane she can handle anything. She is the mortar to her pride now. I can’t even comprehend how the next book will unfold but I know this: Faythe will hold NOTHING back.

Greg, Faythe’s father, holds a special place in my heart. He’s such an Alpha male and a great father that I can’t help loving him. The BS that is the council pisses me off and I am so hoping he comes out on top in the end. I would be crushed if he dies. Seriously Rachel. Do not do that to me.

Marc is amazing. He’s a stray but really, what does that mean? If you can prove that you kick ass you should be allowed to enter a Pride and rule. He has the character and the ability to succeed with Faythe. He’s super smart and strong and he shows that in this book. Rachel visited yesterday and explained why she made Marc a stray.

Kaci is such a teenager! Sci Fi Guy had a great excerpt of a conversation between Faythe and Kaci on his review:

“Whoa, Kaci, back up a bit.” I shook my head and made myself meet her frank gaze. “You’re waaaay too young to be thinking, about sex.
She rolled her eyes, and the gesture was eerily familiar from my own adolescence. Okay, also from what little of my adulthood I’d survived so far.
“I was talking about kissing,” Kaci said, in that exasperated tone she usually saved for my mother, during home-schooling. “I just meant, how old were you when you first kissed Marc? But since you brought up sex…” Her eyes glinted with a spark of mischief. “Same question.”
Damn it! “Way older than you are.” My head was throbbing and pain was shooting through my chest. I was having a panic attack. The little whelp was giving me an aneurism!

She does a real number on Faythe. It proves that one day Faythe will be an excellent mother. She may not realize it now but she will rock.

Ethan and Jace are ever present in this edition of Faythe’s life and they both have some amazing scenes, as noted by the above excerpt.

Yup, Rachel knows how to throw this in there. It’s there and it’s craziness but necessary I’m afraid. I’m sure you’re wondering WTF I’m talking about but I can’t say much more. With everything that happens it’s understandable and I’m aching to know what happens in the next book. Clear as mud? Good. :)

Eh, the title is okay and the cover is nice. I haven’t noticed if her injuires are accurate on previous covers but this one is.

This book rocked. It had the mystery element, the passion, the kick assness and it had the emotional pull that sucks me in to Faythe’s world. It left me wanting. I want to know what happens next like I wanted to know what happened next at the end of Pride. Exiling Marc? No big deal now. War amongst the Prides? Tell me more!

Thank you for being such an amazing author. Your writing has grown so much throughout this series. I think you proved to us that you’re not here to just write, you’re here to take our breath away. You’ve done that for me and I thank you.

Giveaway!
Rachel has graciously offered a signed copy of Prey to a follower! A separate post has been created with the information!

The series is as follows:

P.S. – Bitten By Books is hosting a contest! Click the below image for more info!

So, what do you think? Have you read Prey already? Did you love it? Did it effect you the same as me? Are you pre-ordering Prey now? Let me know!

Bad Behavior has blocked 754 access attempts in the last 7 days.